Norwegian carried more than 2.9 million passengers this month, an increase of nine percent compared to the same month previous year. The load factor was 94.6 percent, up 0.8 percentage points.

The total traffic growth (RPK) increased by 15 percent this month, while the capacity growth was 14 percent.

“We are very pleased that so many passengers chose to fly with Norwegian in July. Today’s traffic figures show a solid load factor across all markets and prove that more and more people realize that it is possible to fly comfortably at a low fare,” said CEO of Norwegian, Bjørn Kjos.

Norwegian operated 99.5 percent of the scheduled flights in July, whereof 64.9 percent departed on time. The on-time performance was considerably affected by delays in European air traffic in general.

In July, Norwegian was also named the ‘World’s Best Low-Cost Long-Haul Airline’ for the second consecutive year and ‘Best Low-Cost Airline in Europe’ for the fourth year in a row at the renowned SkyTrax World Airline Awards. 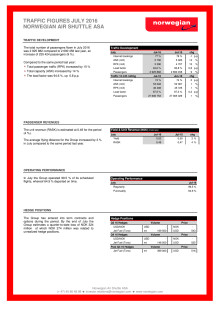