Today, Norwegian announced financial results for the first quarter, showing a unit cost of NOK 0.40 ex. fuel. This represented a large cost reduction compared to the same period last year. More than 2.7 million passengers chose to travel with Norwegian in the first quarter of 2010, an increase of 28 per cent compared to the same period last year. The turnover was NOK 1.6 billion, an increase of 15 percent. The net result after tax was MNOK -199.

- In light of the strong passenger and production growth I’m satisfied with the result. I’m especially pleased that we have reduced our costs, thus strengthening our competitive position. We expected to report a loss during the first quarter but I’m happy that we delivered a better set of numbers than the market expected, said Norwegian CEO Bjorn Kjos.

Since 2009, the company has reduced costs significantly. Between 2009 and 2010, the unit cost was reduced by 11 per cent ex. fuel and has now been cut to NOK 0.40. New aircraft with higher capacity will enable Norwegian to operate even more efficiently, thus reducing the unit cost further.

During the first quarter, Norwegian received 6 new Boeing 737-800 aircraft from Seattle. Norwegian currently has a fleet of 52 aircraft. By 2014, Norwegian will have one of the most environmentally friendly and modern fleets in Europe.

- New aircraft mean an improved travel experience for the passengers, and fewer delays due to technical maintenance. New aircraft also make us even more cost efficient. This is a fleet for the future, said Kjos.

Norwegian Air Shuttle ASA, commercially branded “Norwegian,” is a public low-cost airline noted on the Oslo Stock Exchange. The company is the second largest airline in Scandinavia, and has a route portfolio that stretches across Europe into North Africa and the Middle East. With competitive prices and customer friendly solutions and service, the company has experienced significant growth over the previous years. With more than 10.7 million passengers in 2009, Norwegian is the 4th largest low-cost airline in Europe. The turnover in 2009 was in excess of NOK 7.3 billion. Norwegian currently operates 52 aircraft on 230 routes to 91 destinations and employes approximately 2 000 people. 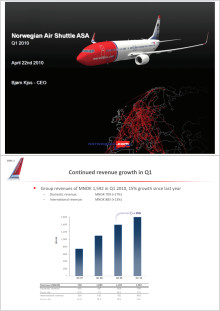