This latest exclusive offer comes as Norwegian encourages more passengers to join its free Reward scheme which now has more than 200,000 members in the UK.

UK members of Norwegian Reward wanting to fly in more comfort from London to U.S. destinations including New York and Los Angeles are being offered an exclusive discount to save at least £130 on Premium class flights between 1st November 2015 and 13th March 2016. Premium passengers can check-in two bags for free and benefit from lounge access before flying in spacious Premium seating on Norwegian’s state-of-the-art Boeing 787 Dreamliner.

Norwegian offers one of the most generous loyalty schemes in the skies and this month, UK members have the chance to win 5,000 CashPoints if they read Norwegian’s guide about the scheme’s currency. Reward membership is free and members can earn up to 1000 CashPoints on hotel bookings per night through Rocketmiles and receive up to 15 per cent off car rental when booked by 15th October.

Brede Huser, Vice President of Norwegian Reward said: “Savvy UK travellers are quickly benefiting from Norwegian Reward’s exclusive and attractive cost savings. We hugely value our members which is why we’re offering Premium class flights to the most sought after U.S. destinations at a significant discount.

“Norwegian is set to expand rapidly in the UK with a series of exciting new routes so there’s never been a better time to join our Reward scheme and enjoy the affordable travel and exclusive benefits it offers.”

Members of Norwegian’s popular loyalty programme, Norwegian Reward can also earn CashPoints up to 30 days after departure. The enhanced scheme will give Reward members even more time to collect CashPoints which can then be used as full or partial payment for any new flights, seat reservations or checked baggage. 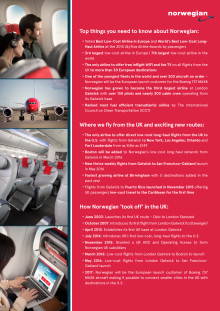 Find out more about Norwegian's presence in the UK market