A total of 2,961,840 passengers chose to fly with Norwegian in March; 145,676 more passengers than the same period last year. The total traffic growth (RPK) increased by nine percent, while the capacity growth (ASK) increased by 11 percent. The load factor was 85.4 percent, down 1.3 percentage points. Easter will always affect the figures positively. Last year, Easter was in March, which means that the revenue per available seat-kilometre (RASK) in March was lower compared to last year.

Norwegian operated 97.4 percent of the scheduled flights in March. Even if the company’s Boeing 737 MAX aircraft were taken out of production, the passenger impact was limited. The airline combined flights and offered passengers alternative departures. In March, 80.8 percent of Norwegian’s flights departed on time.

“Despite the fact that our Boeing 737 MAX aircraft were taken out of production this month, the regularity is satisfactory, and the punctuality is up 8.5 percentage points. Our dedicated colleagues here at Norwegian have been working day and night to find solutions for our customers. Those affected by the changes have shown great understanding of a situation that is beyond Norwegian’s control and I would like to thank them for that,” said CEO of Norwegian, Bjørn Kjos.

“We have had some productive meetings with Boeing where we have discussed how we can manoeuvre through the difficulties the MAX situation is causing Norwegian,” Kjos added. 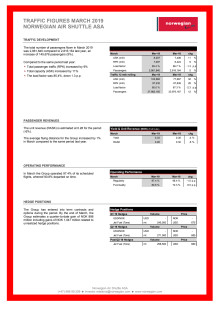