- Washington Wizards and New York Knicks to Meet at The O2 Jan. 17 -

LONDON, Oct. 15, 2018 – The National Basketball Association (NBA) and Norwegian announced today a partnership that sees the award-winning airline named presenting partner of the NBA London Game 2019. The regular-season game will feature the Washington Wizards and the New York Knicks at The O2 on Thursday, Jan. 17.

In addition to being the presenting partner of the NBA London Game 2019, Norwegian, voted world’s best low-cost, long-haul airline,will receive prominent brand exposure, including event logo inclusion, oncourt and in-arena signage, along with creating bespoke content with NBA legends and hosting fan activations and promotions leading up to and during the game.

“We are excited to partner with an award-winning airline in Norwegian on our ninth regular-season game in the capital,” said NBA EME Vice President, Global Partnerships, Vandana Balachandar. “Together, we are ready to take off, offering fans in the UK both the chance to enjoy an authentic NBA experience at the NBA London Game and opportunities to see NBA games in several of the major U.S. cities served by Norwegian.”

“The NBA brand is recognised across the globe and represents the pinnacle of sports entertainment,” said Director of Marketing at Norwegian, Stine Borke. “We are very proud to be presenting partner of the NBA London Game 2019 and look forward to welcoming thousands of fans to the game taking place at The O2. Norwegian currently serves 12 U.S. destinations from the UK and this exciting partnership will increase our brand presence to a wide audience on both sides of the Atlantic.”

As part of the partnership, Norwegian will offer fans the chance to win tickets to the NBA London Game 2019 presented by Norwegian. In addition, they will give fans the opportunity to travel with their award-winning airline to experience a 2018-19 regular-season NBA game in the United States. Norwegian offers flights to several U.S. destinations, including Boston, Chicago, Denver, Los Angeles, Miami, New York, Orlando and San Francisco.

Fans in the UK can find more NBA information at NBA.com/UK, and on Facebook (NBA UK) and Twitter (@NBAUK). Fans can also purchase all the latest Knicks and Wizards merchandise at NBAStore.eu and at The O2 on game night.

The NBA is a global sports and media business built around four professional sports leagues: the National Basketball Association, the Women’s National Basketball Association, the NBA G League and the NBA 2K League. The NBA has established a major international presence with games and programming in 215 countries and territories in 50 languages, and merchandise for sale in more than 100,000 stores in 100 countries on six continents. NBA rosters at the start of the 2017-18 season featured 108 international players from a record 42 countries and territories. NBA Digital’s assets include NBA TV, NBA.com, the NBA App and NBA League Pass. The NBA has created one of the largest social media communities in the world, with 1.5 billion likes and followers globally across all league, team, and player platforms. Through NBA Cares, the league addresses important social issues by working with internationally recognized youth-serving organizations that support education, youth and family development, and health-related causes.

Norwegian carries 5.8 million UK passengers each year from London Gatwick, Edinburgh and Manchester Airports to 50 destinations worldwide. Norwegian is the third largest airline at London Gatwick, with 4.6 million yearly passengers, and with more than 1,000 UK-based pilots and cabin crew.

Norwegian is the only airline to offer free inflight WiFi on UK flights to more than 30 European destinations.

The airline has one of the youngest aircraft fleets in the world with an average age of 3.7 years, including next-generation Boeing 787 Dreamliner, Boeing 737 MAX and Boeing 737-800s.

Norwegian Reward is the airline's free to join award-winning loyalty programme offering members CashPoints and Rewards that reduce the cost of Norwegian flights. 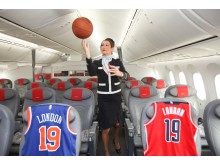 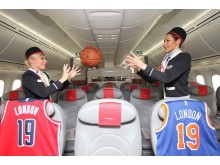 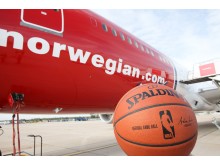 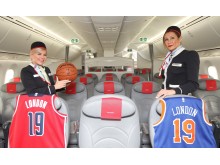