Norwegian, Europe’s third largest low-cost airline, has today announced plans to launch new direct low-cost transatlantic services from Cork to Boston and New York – the new routes will be the only transatlantic flights to operate from Cork Airport. A new Cork to Barcelona route will also be launched.

The new routes will be operated under Norwegian’s Irish subsidiary Norwegian Air International Ltd (NAI) and form part of the airline’s plans for continued expansion in the UK and Ireland.

Norwegian already offers the UK’s only low-cost long-haul flights from Gatwick to New York, LA, Orlando, Fort Lauderdale and Boston with prices from just £149. With a series of new generation Boeing 737 aircraft on order, Norwegian is now planning additional long-haul services from Cork Airport. The new short and long-haul routes announced today include:

Plans for the new routes were today confirmed in a letter from Norwegian CEO Bjorn Kjos to Ireland’s Minister for Transport, Tourism and Sport, Paschal Donohoe.

Norwegian CEO Bjorn Kjos said: “Norwegian is leading the way in offering affordable transatlantic travel and with the new generation aircraft we have on order, we now have exciting plans to offer low-cost flights from Cork to Boston in 2016 and Cork to New York in 2017.

“We are delighted to offer a long-awaited service from the U.S. to Cork and the southern parts of Ireland which will create huge business, leisure and tourism opportunities. Our new Cork to Barcelona route is also an exciting addition to our growing network.

"This is only the beginning of our plans for new routes in Ireland but our expansion relies on the U.S. Department of Transportation (DoT) finally approving Norwegian Air International’s application for a foreign carrier permit. Only DoT approval for NAI will unlock the door for these exciting new routes, creating more competition, more choice and better fares for business and leisure passengers on both sides of the Atlantic.”

Cork Airport Managing Director Niall MacCarthy said: “We’re delighted that Norwegian will operate Cork Airport’s first transatlantic service. Cork Airport has a robust hinterland with a well-developed industrial base and a fantastic tourism product. We’re sure there will be strong demand for these new transatlantic services from both business and leisure passengers. We look forward to working closely with Norwegian and our local partners to promote these new services and to grow passenger traffic at Cork.”

The new long-haul routes from Cork to Boston and New York will be serviced by B737-800 aircraft and the new B737MAX for which Norwegian Air International will be Boeings European launch customer.

Norwegian has grown to become the third largest airline at Gatwick and also operates from Birmingham, Edinburgh and Manchester Airports 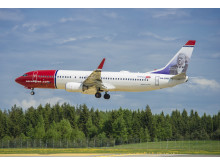