Norwegian is partnering with easyJet on the new ‘Worldwide by easyJet’ platform, allowing passengers to connect a Norwegian long-haul flight with an easyJet short-haul flight in one single booking.

Launched by easyJet today, ‘Worldwide by easyJet’ allows passengers to seamlessly connect their easyJet flight with other partner airline flights, including Norwegian’s fast-growing network of affordable long-haul flights to the U.S, Asia and South America.

With seats available from today on easyJet.com, the ‘Worldwide by easyJet’ service will initially focus on routes at London Gatwick Airport, using the airport’s ‘Gatwick Connects’ product. easyJet then expect the service to expand to other key airports in Europe in future, including airports where Norwegian also offers long-haul connections such as Paris Charles De Gaulle and Barcelona.

Norwegian’s long-haul network now includes more than 55 routes from Europe to the U.S, Asia and South America. From London Gatwick, Norwegian already offers direct, affordable long-haul flights to 13 destinations, including 11 major US cities, plus Singapore and Buenos Aires. easyJet flies on more of Europe’s 100 largest routes than any other airline.

Norwegian Chief Commercial Officer Thomas Ramdahl said: "Travel should be affordable for all so we are delighted to partner with another quality low-cost airline like easyJet to offer passengers even more choice.

“We already see a large number of passengers making connections between Norwegian’s own long-haul and short-haul networks and we welcome initiatives like ‘Worldwide by easyJet’ that give customers even more opportunities for affordable transfers between flights.

“With Norwegian’s growing long-haul networks and easyJet’s extensive European routes, millions more passengers will have the chance to travel to some of the world's top destinations, all with great fares, smooth connections and a quality service."

Peter Duffy, Chief Commercial Office for easyJet, commented: "The way we have designed Worldwide by easyJet means that we can profitably access a major new pool of customers without undermining easyJet’s operating model and industry leading punctuality.

“We know there is a real customer demand for making flight connections on easyJet easier. Almost 200k easyJet passengers a year already self-connect their easyJet flights through Gatwick Airport. That’s c.1% of our passengers at the airport and that doesn’t include those connecting between easyJet and long haul flights.“We are delighted with the partners who have signed up for our launch today. We are confident it will be popular with customers and look forward to announcing more partners in the near future. “Whilst Worldwide by easyJet is launching with our largest base London Gatwick we will broaden our focus to include our other biggest airports - such as Milan Malpensa, Geneva, Amsterdam, Paris Charles De Gaulle and Barcelona. Between them they have tens of millions of connecting passengers each year whose journeys start or end in Europe.

"Worldwide by easyJet will also allow airlines with complementary networks to easyJet to sell their seats to our customer base – accessing the 360m visitors to easyJet.com every year.”

Guy Stephenson, Chief Commercial Officer, Gatwick Airport, said: “GatwickConnects lets passengers seamlessly self-connect between different airlines at Gatwick at the touch of the button. easyJet is our biggest airline and by partnering with GatwickConnects, easyJet passengers can easily and quickly self-connect with other flights in Gatwick’s diverse network of flights including our 60 long haul routes.”

Worldwide by easyJet is subject to a 2 hour 30 minute ‘Minimum Connection Time’, which will give customers plenty of time to transfer between flights and/or terminals. Should a passenger miss a connecting flight they will be transferred to the next available flight. Technology partner Dohop will be providing the technology platform for Worldwide by easyJet.

Norwegian is the world's sixth largest low-cost airline operating over 500 routes to more than 150 destinations in Europe, the U.S, South America and Asia – this includes direct, affordable flights on more than 50 routes between Europe and the USA.

In 2016, Norwegian carried almost 30 million passengers on-board a modern, environmentally friendly fleet of more than 130 aircraft with an average age of 3.6 years.

easyJet flies on more of Europe’s most popular routes than any other airline. easyJet carries 75 million passengers annually, of which around 20% are travelling on business. easyJet flies over 270 aircraft on more than 800 routes to over 130 airports across 31 countries. More than 300 million Europeans live within one hour's drive of an easyJet airport.

easyJet aims to be a good corporate citizen, employing people on local contracts in seven countries across Europe in full compliance with national laws and recognising their trade unions. The airline supports a number of local charities and also has a corporate partnership with UNICEF which has raised over £9m for the most vulnerable children since it was established in 2012.

GatwickConnects is a world-first airport booking service that lets passengers seamlessly book connecting flights with different airlines in a single transaction. Launched in 2015, GatwickConnects gives the airport’s 1.7 million yearly self-connecting passengers more choice and value by allowing them to easily combine a wide range of non-interlined flights provided by 10 different airlines at Gatwick, while also insuring against any missed connections (replacement flights, hotels and meals).

The service also takes the strain out of making a connecting flight, with GatwickConnects bag drop desks located in the airport’s baggage reclaim halls so that passengers’ luggage can be put directly on the onward flight and customers can go straight through security without checking their bag in again. 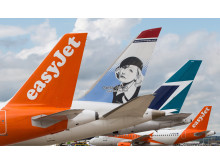