Norwegian flew more than 1.2 million passengers in January 2013. This is an increase of 9 percent compared to January last year.

In January, 1,237,195 passengers flew with Norwegian. This is an increase of 9 percent compared to January 2012. The total passenger traffic (RPK) increased by 19 percent and the total capacity (ASK) increased by 24 percent this month. The unit revenue figures were also positive, with a RASK increase of 3 percent. The load factor was 72 percent in January, down three percentage points.

“I’m pleased with this month’s traffic figures, particularly since January is low season. It shows that our new, more comfortable and environmentally friendly aircraft is appreciated by our customers. The change in load factor is in line with our expectations as we increase capacity during the low season,” Norwegian’s CEO Bjørn Kjos said.

Norwegian operated 99.8 percent of its scheduled flights in January, whereof 80.7 departed on time.

In January, Norwegian took delivery of two brand new Boeing 737-800 aircraft. All in all, 14 new aircraft will be added to the fleet this year. With an average age of 4.8 years, Norwegian’s fleet is one of Europe’s newest and most environmentally friendly.

Norwegian Air Shuttle ASA, commercially branded “Norwegian,” is a public low-cost airline noted on the Oslo Stock Exchange. The company is the second largest airline in Scandinavia, and has a route portfolio that stretches across Europe into North Africa and the Middle East. In May 2013 it will even commence long-haul flights from Scandinavia to the US and Asia. With competitive prices and customer friendly solutions and service, the company has experienced significant growth over the previous years. With close to 16 million passengers in 2011, Norwegian is the 3rd largest low-cost airline in Europe. Norwegian currently operates 68 aircraft on 330 routes to 120 destinations and employs approximately 2,500 people. Norwegian's fleet has an average age of 4,9 years; the company currently has 280 aircraft on order. 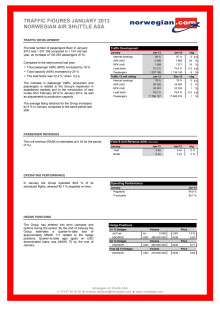