Norwegian carried more than 2.9 million passengers in May, an increase of 11 per cent compared to the same month last year. The load factor was 86.5 per cent.

A total of 2,923,597 passengers chose to fly with Norwegian in May, 281,931 more than the same period last year. The total traffic growth (RPK) increased by 17 per cent, while the capacity growth (ASK) increased by 19 per cent.

Norwegian CEO Bjørn Kjos said: “We are very pleased to see that more passengers chose to fly Norwegian. Our international growth continues, in line with the company’s global strategy, enabling us to create more jobs. The launch of our new long-haul base in Rome and the routes to New York, Los Angeles and San Francisco have been very well received on both sides of the Atlantic.”

Norwegian operated 99.7 per cent of the scheduled flights in May, of which 82.7 per cent departed on time.

Norwegian’s fleet renewal program continues with full force in 2017. The company took delivery of one Boeing 787-9 Dreamliner and three Boeing 737-800s in May. With an average age of only 3.6 years, Norwegian’s fleet is one of the world’s “greenest” and most modern. 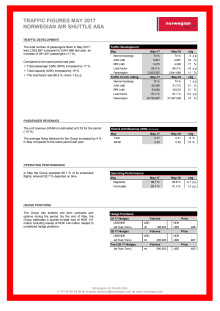