Norwegian is expanding its trailblazing long-haul network by launching the UK’s cheapest direct flights to Denver and Seattle from just £179 one way.

On 16th September, the airline will commence the only direct service from London Gatwick to Denver and the following day, 17th September, Norwegian’s first route to America’s Pacific Northwest will take flight, giving business and leisure travellers more choice and affordable fares for travel to the USA, available at www.norwegian.com/uk.

From 16th September, Norwegian’s brand new year-round service from London Gatwick to Denver International Airport will take off, providing travellers with a low-cost way to reach the city. Passengers can explore vibrant Denver, before heading for adventure in the abundance of national parks situated in Colorado – perfect for experiencing the great outdoors. A twice-weekly service will operate on Tuesday and Saturday during the summer season and will increase to a three-weekly service in the winter with an additional Thursday departure with fares from £179 one-way in economy.

From 17th September, Europe’s third largest low-cost carrier will commence a year-round service from Gatwick to Seattle-Tacoma International Airport. The new service will provide passengers with an affordable option to explore Washington State. One of America’s fastest growing cities which sits at the foot of snow capped volcanoes, verdant forests and sensational seascapes, Seattle is truly where outdoor adventure meets urban lifestyle. Four weekly flights will operate on Monday, Wednesday, Friday and Sunday with fares from £179 one-way in economy.

Passengers will fly on state-of-the-art Boeing 787 Dreamliner aircraft, which offers up to 344 seats in two cabins – economy and Premium. Passengers can choose from a sleek modern economy cabin with complimentary seatback inflight entertainment or a Premium cabin, which offers spacious seating with more than a metre of legroom, Premium meal service, a generous baggage allowance and lounge access at selected airports which is available from £599 to Seattle and Denver.

Norwegian Chief Commercial Officer Thomas Ramdahl said: “We are excited to add Denver and Seattle to our growing list of US destinations, offering passengers the only direct route from London Gatwick to these iconic destinations.

“Both Denver and Seattle offer travellers the chance to explore these vibrant cities before enjoying the adventurous outdoors.

“As we expand our high-quality services to the USA, we will continue offering consumers greater choice and affordable fares when flying Norwegian”

Guy Stephenson, Chief Commercial Officer at Gatwick Airport said: “Norwegian is responding to strong demand on both sides of the Atlantic and these new routes are likely to be popular with both tourists and business passengers. Both destinations are established gateways to the spectacular American outdoors and are also prominent business centres with established hi-tech and advanced manufacturing industries.

“These new routes also play a significant part in Gatwick’s flourishing 60-strong long-haul route network, which is providing vital connectivity to destinations beyond Europe at an important time for UK business including those that export cargo.”

“This is another example of how diverse and widespread our economic growth is here in the region as Norwegian will provide another choice for travelers at Sea-Tac,” said Lance Lyttle, Managing Director of Sea-Tac Airport. “We welcome Norwegian to the team here, this is the 16th new international service in the last ten years.”

“Norwegian’s new nonstop service between London Gatwick and Denver provides opportunities for European travelers to explore the art, entertainment, delicious food, nearly 300 craft breweries and much more all throughout our great city,” said Denver Mayor Michael B. Hancock. “Denver has so much to offer both travelers and businesses, and we are confident many visitors will use this new flight to explore our beautiful city.”

Denver and Seattle will be Norwegian’s eighth and ninth US route launched from London Gatwick in the past three years. By March next year, Norwegian will become the second largest long-haul airline at Gatwick with 13 direct long-haul routes following the launch of Singapore in September, Buenos Aires in February and Chicago and Austin in March 2018.

Norwegian carries more than 5 million UK passengers each year from 5 UK airports, to over 50 global destinations. The airline has one of the youngest aircraft fleets in the world with an average age of 3.6 years, and more than 200 new aircraft on order. Earlier this summer Norwegian was awarded the ‘World's best low-cost long-haul airline’ for the third consecutive year at the SkyTrax World Airline Awards.

Norwegian is the world's sixth largest low-cost airline operating over 500 routes to more than 150 destinations in Europe, the U.S, South America and Asia – this includes direct, affordable flights on more than 50 routes between Europe and the USA.

In 2016, Norwegian carried almost 30 million passengers on-board a modern, environmentally friendly fleet of more than 130 aircraft with an average age of 3.6 years. 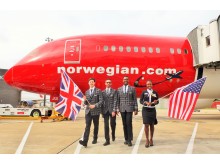