The Easter bunny has come early this year, as low-cost airline Norwegian today launches a special 5-day Easter sale-offering passengers 15% off direct transatlantic flights from the UK and Ireland to 10 US destinations.

The discount is calculated on ‘net’ fares, excluding taxes and charges, with transatlantic fares available from as low as £134/€117 one way. From Wednesday 12th April 00.01 until 22.59 BST on Sunday 16th April, passengers can access special Easter weekend savings on 17 of Norwegian’s long-haul routes to the U.S.

Belfast and Edinburgh to the U.S. east coast

The 5-day sale includes savings on Norwegian’s newest transatlantic routes from Belfast and Edinburgh to the east coast of America. Passengers can save 15% on flights from both Belfast and Edinburgh to Providence Airport (Boston) and Stewart International Airport (New York) as well as flights from Edinburgh to Bradley International Airport (New England). Passengers can book now at www.norwegian.com/uk using discount code EASTER2017UK on travel from 15th June – 14th December 2017.

Savvy savers can also enjoy discounts on Norwegian’s brand new USA flights from Shannon, Cork and Dublin. Passengers can save 15% on flights from Cork, Shannon and Dublin to Providence Airport (Boston); and from Shannon and Dublin to Stewart International Airport (New York). The discount is available on travel from 1st July – 14th December 2017 and can be booked now at www.norwegian.com/ie using discount code EASTER2017IE.

Norwegian Chief Commercial Officer Thomas Ramdahl said: “Our 5-day Easter fare-busting bonanza will give consumers the chance to enjoy further savings on 17 transatlantic routes from the UK and Ireland. These fantastic offers will provide passengers high quality flights at even more affordable fares, all while flying on one of the youngest and greenest fleets in the industry”.

Following the success of Norwegian’s long-haul service from London Gatwick to a number of popular cities in the U.S, the airline will add two new transatlantic routes to Seattle and Denver this September, , as well as increasing the number of flights to the USA from the airport by 55% this summer. A fleet of brand new 787 Dreamliner aircraft offering an economy and Premium cabin operate all Norwegian long-haul routes from London Gatwick.

Norwegian has continued its growth plans in the UK and Ireland with a huge expansion on its long-haul network. In February, Norwegian launched 10 new transatlantic routes from Edinburgh, Belfast, Cork, Shannon and Dublin. These new flights will serve smaller airports on the US east coast, which offer good access into the New York, Boston and New England areas but carry significantly lower landing charges, allowing Norwegian to offer some truly affordable fares.

The new routes from Edinburgh, Belfast, Cork, Shannon and Dublin will be operated on brand new Boeing 737 MAX aircraft - Norwegian is the European launch customer for this state-of-the-art new aircraft which offers a longer range than existing single-aisle aircraft. Passengers will be able to travel in a fresh and modern single-class economy cabin.

Discount is calculated on available fares exclusive of taxes and charges. 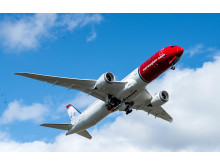 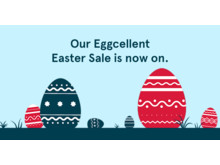