Norwegian CEO Bjorn Kjos last night received an ‘Outstanding Contribution to Aviation’ award from the Irish aviation industry, calling the accolade a “true honour” and dedicating it to the huge support Norwegian has received across Ireland in recent years.

Kjos co-founded Norwegian in 1993 with the airline rapidly growing from a domestic carrier in Norway into Europe’s third-largest low cost carrier today. Norwegian now flies more than 30 million passengers each year to over 150 global destinations.

To support Norwegian’s European and global growth, an Irish subsidiary Norwegian Air International (NAI) was established in 2013 with a headquarters in Dublin – NAI now has nearly 2,100 pilots and crew, with 57 Irish-registered aircraft operating over 260 flights each day from 11 European bases.

Earlier this year it was announced that NAI will also operate 19 new weekly transatlantic flights from Cork, Shannon and Dublin to the US east coast this summer. As well as delivering new routes and significant economic benefits on both sides of the Atlantic, Norwegian is also establishing two new pilot and crew bases in the US to serve the routes, creating several hundred jobs.

The launch of new transatlantic flights from Ireland followed Norwegian’s long-running application for a Foreign Carrier Permit with the US authorities. In receiving the ‘Outstanding Contribution to Aviation’accolade last night, CEO Bjorn Kjos praised the significant and crucial support of the Irish community in securing the much needed permit.

“This award is a tremendous honour but there are many people that helped me and Norwegian to get here today. I want to thank the aviation industry and particularly the Irish community for their huge support throughout Norwegian’s growth.

“Securing a US permit simply wouldn’t have been possible without the huge support we received across Ireland. In particular I want to thank the Irish Government, including An Taoiseach, Enda Kenny, the current Minister of Transport, Shane Ross and two of his former predecessors, and a very special thank you to Eamonn Brennan from the IAA for all his assistance. Thanks also to the many airports, airlines and business groups who helped push this issue continuously.

“Receiving our US permit was a victory for passengers above all, allowing us to offer new routes and more choice as well as hundreds of new jobs in Europe and the US. New routes, greater competition and more jobs – exactly what we promised and exactly what the Open Skies agreement is for.

“Thank you again for this accolade – it is a true honour but I wouldn’t be here without your help so I would like to dedicate it to everyone in Ireland that has supported us over the last few years.”

Earlier on Friday, Norwegian also announced Tom Crean as its first ever Irish tail fin hero with the explorer’s portrait set to appear on new 737MAX aircraft that will serve new transatlantic routes from Cork, Shannon and Dublin this summer. In collecting the IAA award, Bjorn Kjos also paid tribute to Tom Crean saying his achievements “are an inspiration to the whole industry never to give up in the face of adversity”.

In receiving the ‘Outstanding Contribution to Aviation’, Bjorn Kjos follows previous recipients of the award including IAG CEO Willie Walsh and CEO of Qantas Alan Joyce. 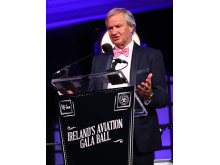 Bjorn Kjos thanks the Iri... 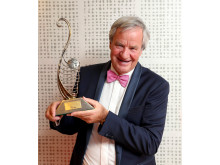