The new route will start in February 2018, with fares from £299 breaking the current monopoly on direct London to Buenos Aires flights, offering passengers more choice and lower fares. Norwegian already offers affordable long-haul flights from London Gatwick to nine US cities and Singapore. Buenos Aires will become Norwegian’s 11th long-haul route from London Gatwick as part of continued expansion from the UK into a range of new global markets.

From 14th February 2018, Norwegian will start a year-round service of four weekly flights from London Gatwick to Buenos Aires Ezeiza International Airport, all on board brand new Boeing 787 Dreamliner aircraft. Passengers can choose from a spacious, modern economy cabin with seatback inflight entertainment and fares from £299 one way. A Premium cabin is also available offering spacious seating with more than a metre of legroom, complimentary meal service, generous baggage allowance and airport lounge access, with Premium fares available from £699 one way. Flights are now on sale at www.norwegian.com

Norwegian CEO Bjorn Kjos said: “With our new Argentina route we are offering UK passengers more choice and lower fares to another exciting global destination. Buenos Aires is a cosmopolitan capital city with something to offer all travellers and Norwegian has fares to suit all budgets.

“From Europe, the USA, Asia and now South America, our long-haul network is going global and the UK will continue to be at the heart of our ambitious plans for expansion. We also see huge potential in the Argentinian market so this is not only a major milestone as our first South American route, it is also a first step towards ambitious plans for international and domestic growth in Argentina.”

Transport Minister Lord Callanan said: “This will unlock new trade and tourism opportunities in UK and Argentina, which will boost our economies, provide more choice for consumers and open up new business links. Britain is a global trading nation and this is an excellent example of government and industry working together to build and strengthen our connections with the world.”

Minister of Tourism of Argentina, Gustavo Santos said: "Argentina has opened to the world and global air connectivity is key for tourism. We celebrate the arrival of this flight and all the air commercial development that Norwegian is undertaking in our country. Argentina world friendly is our touristic brand, a concept which symbolizes our open arms to receive new travellers."

Argentine Ambassador Carlos Sersale di Cerisano said: “Ever since the new government took office, the ministries of Transport, Tourism and Foreign Affairs started working to spike visits to Argentina. In 2016 visitors from the United Kingdom soared 7%. Our plan is to boost figures from 5.7 to 9 million tourists by 2020 to promote our country, its culture, nature and products. This announcement by Norwegian is key to improve our country´s international air connectivity for a better integration to the world. The fact that the airline chose Buenos Aires to open its first ever South American route confirms that Argentina is the natural door to the continent.”

Gatwick Airport CEO Stewart Wingate said: “Norwegian’s new direct route to Buenos Aires shows that the low cost long haul revolution continues to break new ground. The boom in these routes is a major factor in Gatwick recording the second largest increase in direct connectivity of any European airport over the last five years. Gatwick now serves more than 50 long haul direct services and this is only the beginning. This is the future of air travel becoming a reality before our eyes and is being driven by new low cost long haul services that Gatwick and Norwegian have pioneered.”

The new London-Argentina route will be operated by the UK subsidiary ‘Norwegian UK’ (NUK) which was established in 2015 to give the airline a stronger foothold in the UK market, and allow it to access bilateral traffic rights to a series of new markets in Asia, Africa and South America. NUK is headquartered at London Gatwick, and will use British-registered aircraft and Gatwick-based crew to operate the new services. Earlier this year, Norwegian also established an Argentinian subsidiary, Norwegian Air Argentina, with plans for a considerable operation in Argentina, including domestic flights.

Norwegian carries more than 5 million UK passengers each year from 5 UK airports, to over 50 global destinations. The airline has one of the youngest aircraft fleets in the world with an average age of 3.6 years, and more than 200 new aircraft on order. Earlier this week it was announced that Norwegian has been awarded the ‘World's best low-cost long-haul airline’ for three consecutive years at the SkyTrax World Airline Awards. 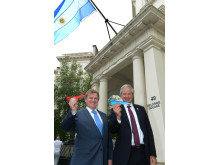